I am so glad that I was drinking water during The Bachelor last night!  My apologies to those of you that are hung over today because of my drinking game.  I had no idea that Sean would spend the first 10 minutes of the show without his shirt.

In case you missed it...

Sean Lowe is a 29 year old Insurance salesman from Dallas. (I'm trying to find out the EXACT location so that I can stalk him when I visit in March.) He wants a house full of love and laughter!  He loves his family and wants some kids. He also likes to run around without his shirt.

As Sean was settling into The Bachelor Pad, Arie paid him a visit. (Arie was #2 to Seans #3 in Emily's season.)  These two have remained friends and Arie is here to help Sean figure out exactly how he is going to pull this off.  They discuss how to give out roses, how to break up with laides and kissing technique. Arie advises.....no tongue.

Soon it's time to meet some of the ladies.  I have to say ABC has outdone themselves this season.  The girls are all beautiful and feisty!   We have a gal that is so excited to learn that Sean is the bachelor that she almost pees her pants, a single mom, a one armed girl, several models, a singer, a yoga instructor, an italian whose Dad will break your legs, a goofy school teacher and a gal that likes bondage.

We also have former bachelorette contestant....Kacie B.  She was on Ben's season and I really thought she was going to win his heart and then her strict parents were a deal breaker.  The girls in the house are NOT happy to see Kacie and don't think she deserves another chance.  Also, can we stop calling her Kacie B.  She's the only Kacie.

I'm going to tell you who the new Courtney is right now.  Her name is Tiarra and she and Sean had an instant connection.  So much so that Sean left her standing in front of the mansion....went to the bathroom, got a drink from the kitchen and then found Chris Harrison and asked him if he could give her a rose already?  Chris doesn't know how to say no, so Tiarra walked into the mansion with a rose.

It was causing panic and stress among the ladies that hadn't gotten to talk to Sean yet and they were now second guessing their nail color.  And drinking....lots of drinking.  Lindsay who choose a wedding dress for her cocktail attire was trying to have her first dance with Sean and get their first kiss out of the way, while Ashley P was trying to tie Sean up with her silver tie.  Only one of these gals got a rose. 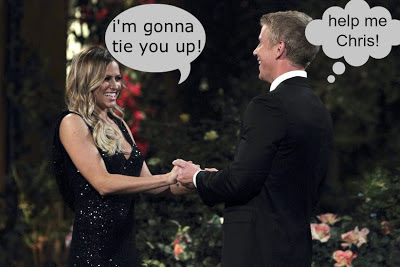 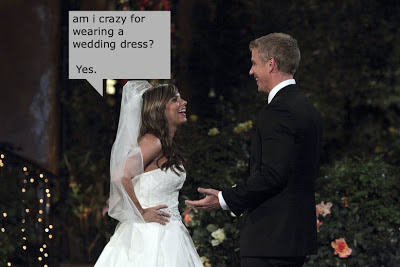 The season looks like it's going to be a good one.  I think Sean makes a connection with many of the girls and they get to show him how athletic and adventurous they are. I can't wait to see where they get to go and who pushed Tiarra down the stairs.

Kacie, 25, from Ben's season
Ashley H., 25, fashion model from Denver, CO
Ashley P., 28, hair stylist from Macomb, MI Wanted to tie Sean up, got tipsy and danced all over the place, showed her ass in her exit interview
Kelly, 28, cruise ship entertainer from Nashville, TN  Sang a song to Sean.
Keriann, 29, entrepreneur from Boca Raton, FL
Lauren, 27, journalist from Cranston, RI Told Sean her Dad would break his legs if he broke her heart.
Paige, 25, jumbotron operator from New York City, NY

Scribbled by Connie at 7:02 AM

Email ThisBlogThis!Share to TwitterShare to FacebookShare to Pinterest
Labels: The Bachelor: Sean