The name of Alex's favorite toy is.... 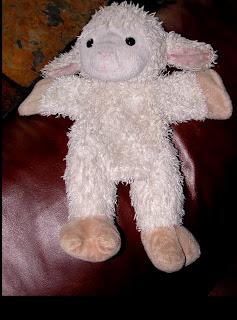 Larry? Really? Who answered that?

Stay tuned for a new poll! This one will be about Mallory!
Scribbled by Connie at 4:18 PM No comments: Links to this post

Alex is 15 months old, as of yesterday. He is growing so fast and seems to be either learning or unlearning something new everyday. Right now, he loves to throw things. But he doesn't know the difference between throwing balls (which are okay) and throwing the remotes and books (which are not okay). From what I have read, you can't teach them to throw one thing vs another at this age so we all have to wear protective gear until he outgrows this or turns 10.


We also have daily temper tantrums. The slightest thing can make him frustrated and cause him to pound his fists into the floor or whatever has offended him. I'm also told that this is normal and that he will outgrown this too. I'm beginning to think that Erick has joined Fight Club...and you know the rules of Fight Club!


Alex has also decided to be a vegetarian. He will take one bite of meat (mostly chicken) and then throw the rest on the floor. But he will eat all of the veggies and fruit that you put in front of him. Oh, and bread. He loves bread. He will never survive on the South Beach Diet!

Alex has always been fond of the toilet. Mostly he would just splash in it so all the bathroom doors have been shut for some time. Well, Wednesday afternoon Alex picked up my cell after I got off the phone with Hubby and held it up to his ear like he was talking. I ran and grabbed the camera and of course he stopped doing it. I went into the bathroom to knock some mud off from my shoes and he came in behind me and plop! In went my cell phone. I grabbed it out of the bowl, turned it off and dried it off. We left it to dry off for two days and now it works great! I am amazed! And so glad that I didn't get an iPhone afterall. That would have been $600 down the toilet...no pun intended!
Scribbled by Connie at 3:37 PM No comments: Links to this post


Mallory is FOUR months old today. I can't believe it. She is still so little and baby like. We tried to feed her oatmeal yesterday and she didn't want any part of it. I think it will be a few more weeks until she is ready. I'm really not in any hurry for her to start eating real food. The longer she can stay my little baby, the better. She is such a sweet and happy baby. Even Alex thinks so, he loves to give her little kisses. And she lights up with the brightest smile when he gets close to her. I can't wait until these too can play together. I think they will have a great time. Next week, Mallory has her 4 month appointment so we will find out how much she weighs and how much she has grown.

Mallory looks so tiny in the high chair. And she has her lips tightly together like...don't feed me anymore of that FOOD! I just love the look on her face.


A recent development...Mallory thinks she doesn't need naps anymore. And she laughs and laughs at me when I wrap her in her blanket. She and I both know that she will get out. But I wrap her anyway and she finds it hysterical.


This is Alex in the same high chair at 3 and a half months. Look how HUGE he is! He started Oatmeal before his 4 month birthday and he loved it. Something tells me Mallory will not eat everything we put in front of her like Alex does.
It will be interesting to compare the kids stats at 4 months.
Scribbled by Connie at 7:58 PM No comments: Links to this post

His nose,that is. Alex has discovered the fine art of nose picking. And if he happens to be hungry he eats his treasure. I'm told that PooPa used to do this too. I'm hoping this is the last of PooPa's habits that Alex picks up.

Alex has been having a rough couple of days. He is breaking two more molars...this time on the bottom. He is in a lot of pain and sleeping has been difficult. Luckily, a little motrin takes the edge off. He still has a lot of teeth that need to come in so this is not the last of it.

Alex also has a old new word. Thank you. He said it a long time ago but has picked it up again. He says it anytime you give him something or when he gives you something. He is so polite! It sounds like TANK GOO. So cute!
Scribbled by Connie at 4:52 PM No comments: Links to this post