Day Out With Jessica

My best friend Jessica was coming to town and I needed to find some stuff for us to do.  I went to Denver.org and put in the day that we'd be spending together.  That's when I discovered that the Great American Beer Fest was going to be that weekend.

This also means that it's Denver Beer Week!  Yeah Baby!

I immediately found the perfect thing for us to do.....a Beer Paring Breakfast!

I asked Jessica if she has convictions about drinking before noon.  She didn't, in fact, she said she encourages it!  I called up Pub 17 on Welton to make a reservation and the nice man that took my information said that my name sounded familiar.  I asked him if he was a member of the PTA and he said no.  He made a big deal about telling me the menu and kept calling me Mrs. Weiss.

Jessica and I arrived a little early for our breakfast and the man I spoke with on the phone greeted us warmly.  I explained to Jess that he thinks I am somebody.  We sat at the bar and ordered Dirty Martinis and he told the bartender that they were on him.  Who does he think I am? 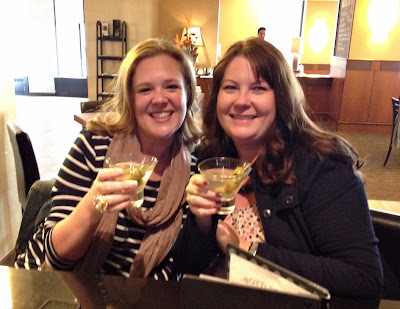 I suppose he could have googled me while we were on the phone. 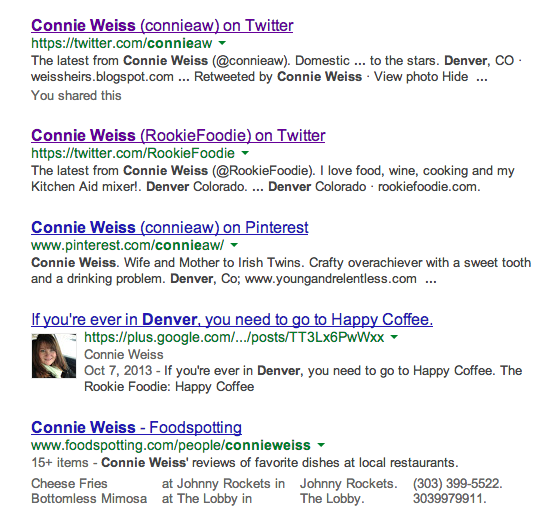 What do you know!  Google thinks I am somebody!


Jessica and I had the best time and our Beer Pairing Breakfast with Fort Collins Brewery was so great! You can read all about it later this week on The Rookie Foodie.
Scribbled by Connie at 6:00 AM 7 comments: Links to this post

We haven't been on a trip since March.  We traveled all over the country for two years and now we're taking a break because we have a big trip coming up in July.

For the first time ever, we'll be taking the kids to my favorite place on earth!  The Olson Cabin.

It's cabin that has been in my family for a very long time and is the place I think of when someone tells me to go to my happy place.  It's in Northern Minnesota on a lake and it's the most peaceful place you could ever imagine.

My Great Grandparents bought the land when they first came to Minnesota and it started as two rooms.  Over the years, they added a bedroom and bathroom with indoor plumbing and a long screened porch.  My Dad just spent 3 weeks at the cabin having it remodeled and our old guest room furniture that belonged to my Mother in Law is now in the bedroom.

I can't wait to take my kids there!

And neither can my Dad.  He sent the kids these shirts last week!  We're so excited.


As you can see....my little photo shoot didn't go so well.  Maybe this should be my new header!

On a side note, we'll also be headed to Canada to spread Robert's ashes at his favorite fishing spot. It will be nice to finally fulfill his wishes.
Scribbled by Connie at 7:11 AM 3 comments: Links to this post

#WFH Excuses if you're over 50 years old


Disclaimer: It is not my intention to enrage the elderly community. I think Obama is doing a great job of that all by himself. I'm also not poking fun at my husband, he helped me make this list.
Scribbled by Connie at 6:00 AM 7 comments: Links to this post