My Senior year of high school was not my best year.  The summer before I had dated a real bad boy.  I broke up with him after I found myself involved in a high speed chase through a trailer park.  It scared the heck out of me and turned me off from dating for a while.

I spent my senior year working at Hillside Auto Supply and studying.   This is likely the only time in my high school career that I devoted so much time and energy to my school work.

My Senior Prom was coming up,  I hadn't been asked to go and I was completely fine with it.  I was paying for all of my own expenses now, because my Dad had been in a bad horseback riding accident and wasn't working.  I didn't want to spend my hard earned money on a silly dress that I wouldn't wear again.

A week before the dance, I got a phone call from Ken, a friend of my Mom that was an armored truck driver.  You know, the trucks that pick up money at businesses for banks.   There was a collaboration called Operation: Take Connie To Prom that I was unaware of.   The masterminds behind this plan were:  My Mom, My boss's wife (she also had her deposits picked up by Ken) and the entire office staff at my high school (also customers of Ken).

They all decided that poor little ole Connie should go to Prom and Ken should be the guy to take me even though....he was 27 years old and wore a toupée.

So I got a phone call from Ken saying that he was taking me to Prom, he already rented a tux and bought the tickets and made dinner reservations and ordered a corsage.  He wasn't going to take NO for an answer.

So, I went to Prom with Ken and his toupee in his powder blue El Camino with curtains in the window and my friends all laughed at me and asked me over and over how OLD my date was. 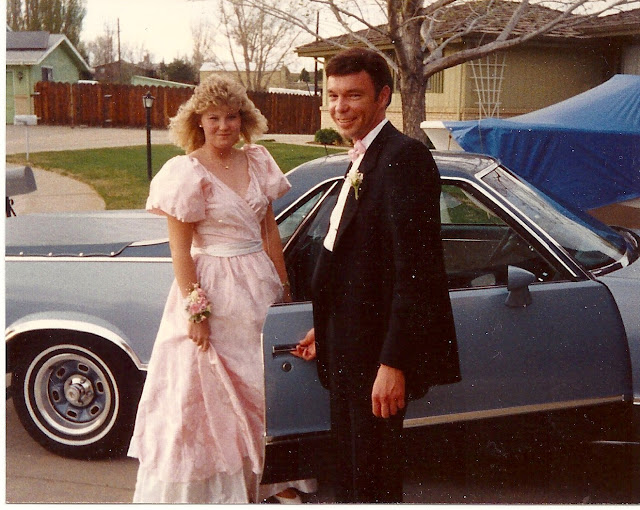 The only thing that saved my evening was the two Orange Wine Coolers that Ken gave me in the car.  This might be where my drinking problem started....THANKS MOM!

Ken called me the next day and asked if I wanted to go for a ride on his motorcycle.  I declined....all I could think about was his hair coming loose and smacking me in the face.  We didn't go out again.


Note: My apologizes to my parents who are just now learning of the high speed chase and the wine coolers.  Lucky for me, I'm too old to be grounded.   I've also changed my dates name to protect his identity.  The truth is...I can't remember his real name and Ken sounded good.

You're probably wondering what happened to me.

PTA is kicking my ass! So much to do and only 7 more days to do it. I'll be back, I promise.

Just a friendly reminder that The Bachelorette starts NEXT Monday. I'll be watching and recapping.

In the meantime, I leave you with a little entertainment. I was watching The Billboard awards last night and I heard Taylor sing this and I immediately changed the words to fit whats happening in my life right now.

My Ode to Peri-menopause! Sing it with me...I don't know about you, but I'm feeling 42!

Scribbled by Connie at 4:26 PM 11 comments: Links to this post