Programming note: Part Two of The Bachelor is on an hour later.

I don't know if it was the travel to Whitefish Montana or if Sean is getting tired from all of the kissing but this episode was kind of hard to watch.  They all seem to be in a funk and no one was braiding each others hair this week.

So...they moved on to Montana, giving the ladies one hour to pack.  Lindsay finds out that she gets the first one on one date and her card says Let Love Sour Soar. (sorry....typo, i'm leaving it in) They run across the yard to a helicopter and go on a lovely sight seeing tour.  Sean likes her because she isn't high maintenance.  She's also as dull as white bread.  We find out that she was a military brat and she moved around a lot.  Now, she'd like to settle down and have a family.  They want the same things and Lindsay gets the rose.  They move on to downtown Whitefish where the town as come out to hear a live concert by Sarah Darling.  She is darling and I like her scarf.

The group date card said, You Make My Heart Race. Eight of the girls are dressed up like Pizza Hut Lumberjacks (thanks Deb), split up into two teams and forced to race for Seans heart.  The events include canoeing 10 feet, dragging a hay bail, cutting wood, milking a goat and then drinking the warm thick milk. 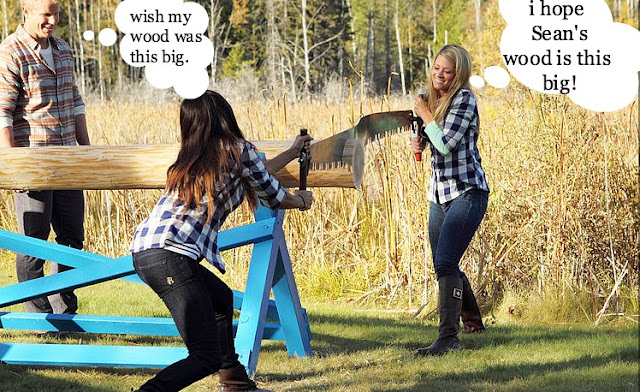 The red team wastes valuable time trying to figure out which activity Sarah can do.  Several of these things would be difficult for a person with one arm to do but then again...the girl can somehow apply make up and do her hair.  She's got this! 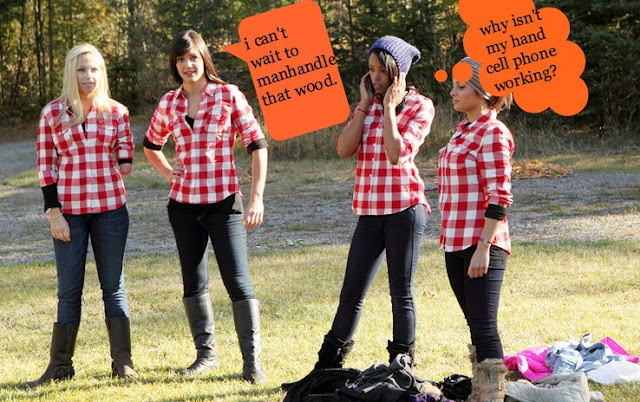 The MVP here is Desiree from the red team!  She not only milked the goat like a pro, but she guzzled the milk.  If that didn't turn Sean on then I don't know what this guy wants!  The losing blue team drives away in the van of shame and the red team gets to have a private party with Sean.

But wait....Chris Harrison shows up at the hotel with a date card for the blue team!  It says come to the party!!  Heck yeah, it's on like donkey kong!  Oh no!  The red team doesn't know....and now they are made and Desiree demonstrated her lack of gag reflex for nothing!

Meanwhile, back at the hotel....Tierra-ble is writing in her burn book and hatches a plan to crash the party without anyone knowing because she is being forced to go on a two on one date with Jackie and she needs a head start.

The red team is angry and having a therapy session with each other while the blue team locks lips with Sean all over the restaurant.  There is lap sitting, there is crying and then....Daniella gets the rose for being the biggest crybaby.  Are you seeing a theme here?

The dreaded Love is a Wild Ride, two on one is as awkward as you'd expect.  They all go horse back riding and Jackie's horse doesn't want to walk with Tierra and her husband.  She looks ridiculous and feels left out.  When she gets some alone time with Sean she decides this is a good time to tell him that Tierra was flirting with someone at the airport on their way to Whitefish.

At dinner, Sean pulls Tierra aside to get to the bottom of this and instead he gets a sob story about an old boyfriend in and out of rehab that passed away.  (can someone fact check this?) This is exactly what Sean needs to hear to keep Tierra and send Jackie home.  Tierra-ble actress gets the rose.

Tierra and Sean sit by a fire while fireworks go off all around them and Tierra acts like it's the first time she's ever seen fireworks before.

The rose ceremony is tense.  Tierra is giving every one the evil eye because they weren't paying attention to her and then stomps off because they are.  Meanwhile, Tierra wishes she was a fighter because she'd like to punch everyone.  Robyn decides to confront her and that's when Tierra has a fireside chat and tells them she doesn't care what they think and she's so over this and if she wanted to get engaged she could because guys are a dime a dozen.

There is a suggestion to give her a Xanax and send her home.  Sean walks in on Tierra going off on Robyn and pulls her aside to talk about it.  She explains that the girls are always attacking her and she doesn't understand why because she's a nice girl.

Sean asks a couple of the girls about Tierra and they are reluctant but explain that she is cold and unfriendly to them.  Sean is very frustrated.  Frustrated should have been a drinking word this week.

Chris announces to the girls that the happy, go lucky, confident guy is not here right now.  They think Sean has left the building!  But no, he's still there he's just frustrated and confused and doesn't know if any of these bitches are going to be his wife.

Tierra, 24 from Denver. Instant connection with Sean, got first first impression rose, not here to make friends. Pushed herself down the stairs. Likes to punch walls.
AshLee, 32 from Houston.  6 flags date
Lindsay, 24 teacher from Missouri.  Wore wedding dress. Helicopter one on one date
Catherine, 26 from Seattle. small enough to sit on Seans lap.
Daniella, 24 from San Fran. cries for roses
Desiree, 26 from LA. 2nd one on one date, hit it off with Sean, prank was played on her. First one to see Sean's house. Can milk a goat. No gag reflex.
Sarah, 26 from LA.  Has one arm, first one on one date, fell 35 stories.
Lesley M, 25 from D.C. Had connection with Sean at photo shoot. World Record holder for longest on-screen kiss.
Selma, 29 from San Diego. Rock climbing date.

Jackie, 25 from FL. two on one date
Robyn, 24 from Houston. Did gymnastics and fell.
Kristy, 25 Model from WI.  Won the harlequin romance contest.
Amanda, 26 model from CA.  Off her meds.
Leslie H, from LA.  Asked Sean about liking black girls. Pretty Woman Date.
Taryn, 30 from OR.
Kacie, 25 from Ben's Season.  Out of the friend zone.  Convinced Katie to leave the show. Talks poop about others, goes home in a mini van.

Email ThisBlogThis!Share to TwitterShare to FacebookShare to Pinterest
Labels: The Bachelor: Sean