Bachelor Ben: Who's That Girl?

Ben is very excited to take the ladies to his hometown of San Francisco.  Wait a minute....I thought Sonoma was his hometown.  How many hometowns does this guy have?

He meets with his sister and tells her about some of the gals and which ones his Mom is going to like.  Blakeley, the VIP stripper waitress is not on this list.  But the faux version of Courtney is.

Chris Harrison welcomes the ladies to their beautiful suite and hands out the first one-on-one date card.  This one goes to Emily and it says Love Lift Us Up.  She immediately starts questioning what this means and also if she's going to pee her pants.  If ABC has anything to do with it....the answer is YES.

Emily soon finds out that her date envolves climbing to the top of the Bay Bridge which is going to be interesting because she is afraid of heights and so is Ben.

Back at the suite, a producer tells Jennifer where to find the couple while she's looking through the telescope.  Everyone gathers around and gets upset over why they can't be the one risking their life and bonding with Ben over crapping their pants.

Halfway up the bridge, Emily freaks out and Ben decides the only way to get her to keep going it to kiss her.  This gives her the super human strength to finish the climb and wrap herself around Ben at the top.

At dinner later, Emily reveals that she hasn't had much luck with dating and that match.com matched her up with her brother.  Emily gets the rose along with Champagne and fireworks.

The group date card says something about a leap list which is apparently the new bucket list.  This date is also a commercial for the new Honda CRV.  The girls are going skiing on fake snow in the middle of San Francisco on a 85 degree day.   My husband is very nervous while watching this part and is concerned that someone is going to get hurt.  Around this time, we discover that Kacey B has never skied before.  ABC didn't provide an instructor and she is now going down the hill backwards. 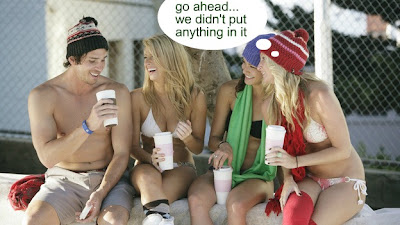 Luckily, they are all medicated with fruity drinks in carved out pineapples and get to put real clothes on.  Rachel leied Ben and tells him how cool and chill she is.  Kacey B takes him for a walk.

Back at the suite, another date card arrives and it's for Brittney.  Instead of being excited about her date, she is disappointed and says that something doesn't feel right.  She tells Emily that these circumstances are not for her and she needs to leave.  Now!

She packs her ONE small suitcase and goes downstairs to find Ben and dump him on national television.  I think she's leaving because she realized she forgot to bring foundation....and a brush.

Meanwhile, Blakeley forgot to wear her shirt and is crying that everyone hates her.  Rachel gets the rose for opening up her mouth to him.

Lindzi gets the date that Brittney rejected and gets to ride around San Francisco, at night, in a Trolly Car.  They stop for ice cream and cruise around China Town.  Ben takes her to city hall and he has the key to the front door.  They sneak through the building with flashlights and come across a band I don't recognize singing a song I've never heard before.  They dance and hug and kiss!

Next, Ben takes her to a speak easy where he has to give a password at a secret door.  He takes her into a secret room behind a book case and asks her why she is still single.  She retells her story about some asshat that broke up with her after a year and a half by text message.  She tells him that she doesn't need a man to complete her.

Ben takes her to a piano store so he can play the only song he knows.  Lindzi gets the rose.

Meanwhile, Chris Harrison is getting phone calls from someone that is coming to crash the party and profess her feelings for Ben.

Courtney makes a toast to a drama free evening and then decides to insult everyone that she can.  I've decided that she has the emotional maturity of a 15 year old girl.   She is snarky, sarcastic and instead of using someone's name...she calls them whatsherbutt.

Jennifer gets some time with Ben and uses it to tell him how much she likes him.  He returns the favor and says that she is the best kisser in the house.  Jennifer thinks she is falling in love.

Shawntel (funeral director from Brad's season) walks in like she owns the place and everyone is freaking out and asking Who's That Girl?  Finally, a producer tells someone recognizes her and this just fuels the flames.  Several of the girls are calling her names, crying and threatening to leave while Shawntel pours her heart out to Ben.

She wants to stay for the rose ceremony and compete for a chance at dating him.  Ben asks the girls to be gracious and welcoming but we all know that isn't going to happen.

Courtney stomps off saying that this is wack and is upset with Ben for not shutting this down and turning her away.  She says she will leave if Shawntel gets the rose.

And the roses go to: (in the order that I like them)

Brittney (Sales rep from CO, brought her Grandma, went home)
Jaclyn (?????)
Erika (law student from Chicago, passed out during rose ceremony, has a tattoo on the inside of her mouth)
Shawntel (contestant from Brad's season, funeral director)

NEXT WEEK:  Park City Utah!
Scribbled by Connie at 1:44 PM