Once again, i've been peer pressured into watching and blogging The Bachelor.  Unfortunately....it doesn't take much to talk me into it because I enjoy a train wreck as much as anyone.  The only problem is that I really want to like Ben....but I'm not really there yet.

We start off meeting several of the ladies, one of which lives in Nebraska, brags about eating bull testicles and shoots guns.  If that doesn't scream WIFE MATERIAL then I don't know what does.

We watch Ben in his new fabulous life living in San Francisco and working in Sonoma.  He talks about how he has clarity now and he's discovered himself.  He's a new man.....wait, where have I heard this before?  Oh yes, ABC is re-using Brad's old script to save money.

Ben is ready to meet the ladies but first he sees a hummingbird that Chris Harrison has planted in the bushes.  It's a SIGN!

One of the first ladies he meets is a blogger from NYC named Jenna.  She tries to quote his famous last words from his break up with Ashley and she messes it up.  She realizes she should have just said Hi.

Several ladies bring props.  One wears a sash from a beauty contest, another wears a giant hat that she later makes Ben try on, another brings her Grandma and then......one rides in on a horse.

Ben tells Rachel (who quit her job to be here) that he's looking for love...not a wife.

Nikki is like a jack russell terrier.  All bubbles and energy.  Ben says he likes it.

Some of the gals are dissing on the people that brought a gimmick.  And a grandma.  I think they are just jealous that they didn't think of it first.

As usual, the appearance of the first impression rose drives people to drink and start acting stupid.

The girls that have no conversational skills start making Ben doing stupid things like push ups, dancing and playing soccer outside.    One girl decides to blindfold Ben and make him guess what she is feeding him. 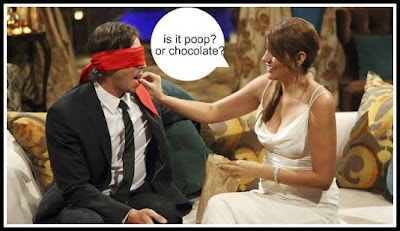 Emily, the Ph.d student decides to rap for Ben.  I actually really liked this gal's introduction.  She gave him some hand sanitizer and breath spray and then got the first kiss.  Very clever!

Jenna and Monica are sitting next to each other and talking about their feelings for Ben.  Jenna is smitten and Monica feels nothing and appears to be here for a free California vacation and who can blame her because Salt Lake City is pretty dull this time of year. 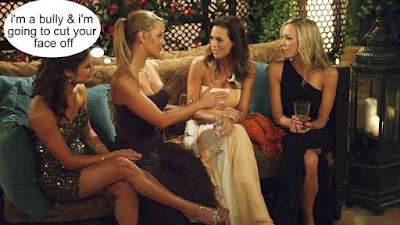 Monica shows her true colors and they have bully written all over them.  Jenna is taking her smiling and laughing personally and runs off to cry.  We hear Monica threaten to cut someone's face off if they cross her.

Next thing we know, Monica is making googly eyes at Blakeley on the couch.  She tells her that she's beautiful and they are going to be in each other's lives forever.  My crazy person radar is going off!!

Rachel decided to patch things up between the two since they are obviously going to be on the show for a while.  Drama = Roses people.  Things don't really go well and Jenna tries to offer an olive branch in the form of a tampon.   Monica doesn't accept and walks away.

Jenna spends a good amount of time having a breakdown in the bathroom which guarantees her a rose tonight.  Note to Jenna: You are miked and every single thing you say in the bathroom is recorded.

The first impression rose goes to Horse girl.  I think her name is Lindzi with a Z.

There is an ex-girlfriend that comes back for Ben and someone is described as The Black Widow.  Looks like lots of drama and crazy girls!

I think it's going to be a great season!