The Day I Channeled My Inner Kate Gosselin

I'm having some trouble getting back into the swing of things. Yesterday was the first day that felt considerably better....and I did what I always do. I overdid it. I cleaned and organized and went all Kate Gosselin on the kids and the mess that they made out of their rooms.  I removed every single toy, stuffed animal, train track and block.  I organized them and put them back in the playroom.  A toyless bedroom is a happy bedroom.

This freak out was triggered by what I found in the basement. PlayDoh...thrown willy nilly all over the room, stuck to walls and placed on the track of my elliptical machine and ran over with the little wheels.

I was so upset that I think Kate Gosselin would have looked at me sideways. I removed all playdoh and playdoh paraphernalia from the house and posted a message on twitter. 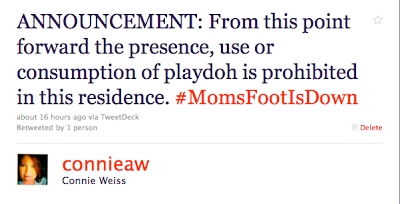 and then I tweeted this.

I got lots of responses that ranged from five minutes to 9 hours.  But you can see the kind of day I was having.  And to make it the PERFECT Kate Gosselin kind of day...I sent Keith to the store with a handful of coupons!  By the time LOST came on I was a blob on the couch with a heating pad pressed to my face and a glass of wine not far from my lips.

That reminds me...Bobbi can you take care of the kids Sunday for a couple hours and bring them home at bedtime all tired and sleepy so that we can watch the LOST EXTRAVAGANZA that starts at 6pm?  That would be awesome.....

I took a break from the percocet on Sunday because I thought it was making me feel like crap.  Turns out it was the aftermath of surgery that was making me feel like crap.  Anyway, it turned out to be a good thing that I was coherient on Sunday because I was in the newspaper....again.  Had I been under the influence I might not have noticed or remembered.

Not long after I moved to Utah and had been rejected by the Mormon population of my little community I turned to the internet for solace.   I found comfort, comradery and happiness in the act of planning for Christmas...all year long.  This is where my ritual of posting about Christmas every month on the 25th began until Keith crushed my spirit and ruined Christmas for me.

Anywho...Mark Saal, a local comedic newpaper journalist wrote an article in the Standard Examiner about crazy people that like that Christmas music starts playing before Thanksgiving.  I wrote him a letter and told him that I listen to Christmas music every month on the 25th and that I am a part of a group of women all over the world that do this.

He wrote another article...an apology and mentioned me by name because about 60 of my friends sent him Christmas cards.

Sunday he wrote another article...this time about the city of Farmington Utah and their desire to purchase $103,000 worth of Christmas decorations. (for the record...he's against it.)  And he mentioned me and my friends again:


I immediately made the naughty list of a sinister underground group called the Rudolph Society or some such - a gang of overly cheerful women who celebrate "Rudolph Day" on the 25th of each month by making year round preparations for Christmas.  I received a number of emails and even Christmas cards from these people, accusing me of trying to steal Christmas.

I can't figure out why Mr. Mark Saal wants to stir this up again. I thought we had reached an understanding and that me and my sinister underground group of friends would be left in peace.  I'm suspicious that he is working with Keith to keep my Christmas Spirit broken.  I'm looking for the money trail....

Mark Saal....all I have to say to you is I Wish You A Merry Christmas and watch your back...I have a tendency to act like Kate Gosselin when provoked.  Just ask Dave.


*****
You may have noticed that I did not publish this month's edition of The Connie Diaries.  I've gotten some emails from people asking me if they are over and if I'll be continuing the saga.  I'm torn.  Young Connie is going to start doing some things that her parents (who read this blog) don't know she did and these parents are coming to take care of Old Connie's children in 18 days and so.....they will resume after that.  Maybe.  I'm also thinking of speeding things along and posting a summery of six months worth of entries at a time.  This will elimanate some of the sordid details and maybe not upset Old Connie's parents too much.  Can you get grounded at 39 years old for things you did when you were 16?

***
What I Wore...will resume next week!  I've been wearing the same pajamas for 5 days and my face looks like CoJo from Entertainment tonight.
Scribbled by Connie at 9:49 AM