Calvin spent much of the weekend like this.....does it remind you of anything? 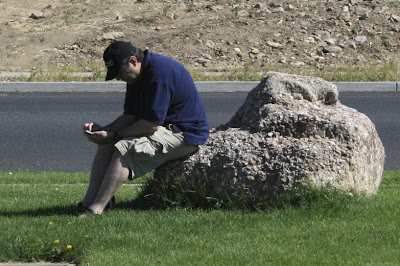 His version 1.0 iPhone has become a fun new toy because of the new applications you can put on it. Apps for list making, radio, twitter, weather and just about anything you can think of. There are even apps to make your iPhone look like a glass of beer or milk.

I've been waiting for months to inherit his old iPhone when the new ones came out. Then the buzz around them wasn't that great and Calvin was disappointed. My hopes and dreams of someday having my own iPhone slowly started to slip away. If he didn't get a new one...I would be stuck with my crappy Razr phone.

Then Saturday, he said we were going to get me a phone that day. We drove to the local AT&T store and there was a line. Only 40 phones left they said. We drove to Layton, they were sold out.

Last year, when Calvin got his phone, he ended up at The Apple store at 11:45 PM to buy it. So, we though that was our best bet. The kids and I went home for naps and he headed to Salt Lack City.

So I wait not so patiently for my new iPhone to arrive. That's right, I get the NEW one. Calvin wants to keep his old one.

Calvin's picture on the rock reminded me of this....

Scribbled by Connie at 6:39 AM