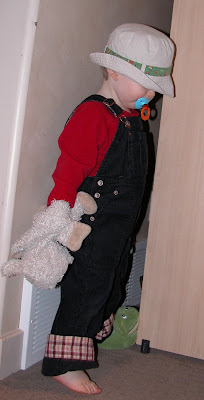 I have been a Mother for 22 months. It doesn't hardly seem possible. I'm completely frustrated with how quickly my children are aging and there isn't a darn thing that I can do about it.

I wanted to post about Alex's age and accomplishments yesterday but I couldn't think of anything that has changed in the last few weeks. He hasn't really done anything new, besides wanting to go for walks every single day in the freezing cold and going on a hunger strike.

But this morning. He did a few things that I think are so darn cute.

I have his pacifier in my pocket. He knows I have it. Normally he just comes up to me and repeats PASS-PASS over and over in this sweet little high pitched voice. Sometimes, I pretend that I don't know where it is and this results in hysterical crying which somedays drives me insane so I give the damn PASS to him.

This morning....he crawled up in my lap, and started giving me little kisses and hugging my head.

And then....he looked me in the eyes and asked for PASS. How could I refuse? 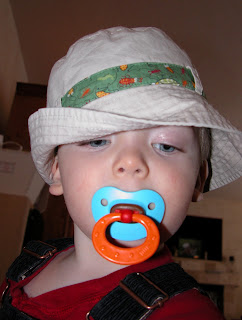 Now, I wanted to change Alex's diaper. He refused and ran away from me. Well, I don't have the energy to fight him so he can sit in that diaper a little longer. A few minutes ago, he brought me his pants and his diaper.

He knows how to remove his clothes and diaper. This can't turn out well. So, he is running around the living room like a crazy person...sans diaper.

Poor Mallory. He just went after her Goldfish Crackers that are in her little flower holder in her bouncy station. She obviously saw where his hands have been because she has covered her Goldfish with her baby bear in an effort to keep Alex's genital touching hands out! She is a smart girl.

Oh, and Alex has shown an interest in building things. Most recently, a tower with his hotdogs.