iKeith and I love to watch movies! We each have our favorite genre...I love romance, drama and comedy, he likes sci-fi, thrillers and zombie movies. I also have become interested in Indie Films since I started watching the Academy Awards last year. iKeith is such a good sport and will generally watch them with me...even though he doesn't like them. He has recently been subjected to The Kids Are All Right and Nine.

So...once in a while, I'll watching one of his sci-fi movies when I'm feeling sorry for him...like when he's sick. This last weekend was one of these times and he selected a movie called Monsters that was a 'before it hits theaters' offer for $6.99 on iTunes. Note: beware of these....I suspect the films aren't really going to theaters and someone is trying to make a buck. Or seven. 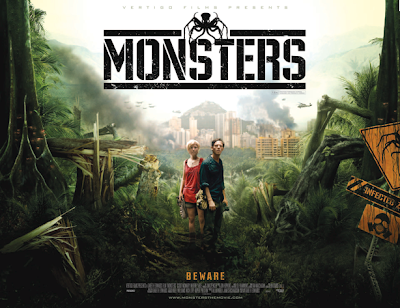 This weekend, I watched the a preview of an upcoming sci-fi thriller Monsters Movie 2010. It is a British production where a man sent by his supervisor to ensure the daughter of their mutual employer returns to the United States from Mexico. There is one catch, Mexico has been invaded by extra-terrestrial aliens that are over one hundred meters tall. Both Mexico and the United States have joined forces to militarily eradicate the Earth of these unwanted invaders.

As the story quickly unfolds, the man and the woman arrange for the woman to board a ferry back to the U.S. The sexual tension between the two is too much for the man to handle and he finds the comfort of some lady of the night when the woman refuses to let him stay the night. This leads to him getting robbed and losing the woman's passport and ticket abroad the ferry. So of course, their only alternative is to trade the woman's engagement ring for passage back to the United States via a spine-tingling journey with nefarious characters and border coyotes through the dreaded infected zone.

I won't say much more about the plot, just in case you really want to watch this monstrosity, but perhaps I can dissuade you from wasting your time. The movie seems to be a metaphor for the horrors that are incurred when poor Mexicans risk all they have to find a better life in the United States by crossing the boarder illegally. The message seems to be that a wall will not stop the flow of aliens (illegal or extra-terrestrial,) so why bother. Regardless, the movie lacks on many levels and ends in a strange and bewildering way.

The tension seems contrived and seemed to borrow from Jurassic Park, Heart of Darkness (Apocalypse Now) and the Hurt Locker. But, the Jurassic Park scene fails because the movie is filmed in a quasi-documentary style (ala Hurt Locker.) Therefore, we as viewers know nothing terrible will really happen to the protagonists. The ride up the river in a war zone, reminiscent of Apocalypse Now, ends in a yawn with the underlying message of, "Why can't we just all get along."

If I were rating this movie on a scale of one to five with a clever unit of measurement based upon something from the movie, I would give it one tentacle probing the television set. It simply is not worth the money to see in the theaters.

Monsters was billed as a science fiction romance drama so I agreed to watch it. My first clue that this wasn't going to turn out well, was when I saw what the lead character Sam was wearing. Short shorts, a fancy tank top and some fugly booties with wool socks.

I don't know what Sam was doing in Mexico and they never tell us but I find it hard to believe that a spoiled little rich girl would go to Alien infested Mexico without a purse and a jacket.  Something tells me she wasn't there for the tequila!  Somehow...she manages to find a spot for her passport (her undies?) and later a nice Mexican woman gives her a bag to hold all of her stuff.

There is some chemistry between Sam and the guy whose name I can't remember but I found out later it's because they are married in real life. She likes him, but rebuffs him and then he gets drunk and sleeps with someone else and she gets mad. If I had a dollar for every time this has happened to me...I'd have had this movie paid for.

Long boring story short...the US rocket (they stole a pic of the Ares-I launch) breaks apart over Mexico with Alien matter in it. They take over Mexico and cause havoc each time a US plane flies over. The Aliens hate the US.  Andrew works for Sam's Daddy Warbucks and he's ordered to get her home safely. This movie chronicles the journey and many obstacles to get her home.

At one point...Sam and Andy watch two aliens make love and then go their separate ways without exchanging digits.  Is there such as thing as an alien booty call?

I give it 1/2 of an expensive diamond engagement ring!

Scribbled by Connie at 8:25 AM