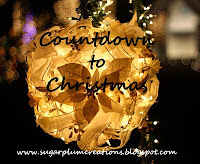 Our elves...Vincent and Poe arrived yesterday!  (Click HERE to read about last year's first week with the elves...it's hilarious!) Santa drops them off everyone year on December 1st so that they can keep a close eye on what's going on here.  I kind of dropped the ball and forgot to inform Santa that we'd moved to Colorado so I send him a quick email the other day.  The kids were upset with me that I'd let this detail slip by.
The kids had been up for about an hour...watching TV on the couch when I told them to hurry to the kitchen because I found something!  The Advent Box! I told them if it was here...then the elves must be too!  Mallory ran to the living room and spotted them right away in their sled.  The were so excited that Alex exclaimed OH MY HECK! 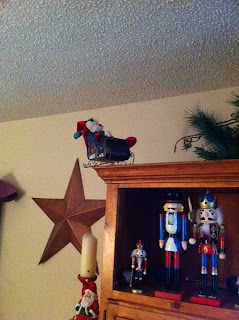 I'm sad to report that Mallory has already found herself on the naughty list.  She threw away a MEGAMIND toy that belongs to Alex because she lost hers and she decided if she can't have one then he can't either.  And then...she stole candy out of the Advent Box.  Now there will be no candy on December 16 and the 20th.  Little stinker.
I've got all kinds of activities planned for this month!  One of the great things about living in Denver is that there is tons of stuff to do.  This Friday night...we're going to the Parade of Lights!  The last time I attended the parade was in 1986.  I hope the kids love it as much as I did.
What have you got planned for this month? Find out what Liz and her family are doing here!
Personalize funny videos and birthday eCards at JibJab!
Scribbled by Connie at 6:59 AM

Email ThisBlogThis!Share to TwitterShare to FacebookShare to Pinterest
Labels: Elfcapades 2010