Again this year, I'm joining the ex-pageant queen and baby making machine known as Liz at Sugar Plum Creations for her Countdown to Christmas!

This is where I will discuss all things Christmas and Elf related. But it's not all elf business. There are so many exciting things coming up on my calendar that I can hardly contain myself!

If you have a weekly wrap-up post you should link up with us.  I love seeing what other Mom's are doing with their families because it's the best way to steal get ideas.

The first idea I stole this year was from Jessica at I finally Did It!  She had let it slip that she was having a North Pole Breakfast so I decided to do that too.  Our elves crash landed into our home on December 1st.  Note to you Mommies that let your elves arrive after Thanksgiving...you are jumping the gun and setting yourself up for disaster.  You CAN NOT maintain the magic for more than 24 days.  It's a proven fact. 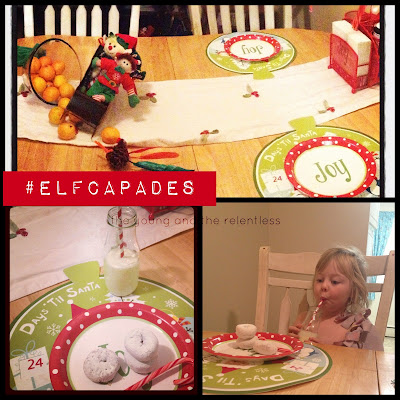 A little tip if you're using the Starbucks Frapachino containers for your breakfast.  Try to drink the coffee beverages a few days before so that you don't have to slam two of them the night before.  It makes for a long night.

A few hours after the elves arrived, Cindy Lou Hoo came to me with questions about a craft store we like to go to.  I thought the Christmas spirit had gripped her hard but it turns out that she was questioning a label she found on Poe's ass. 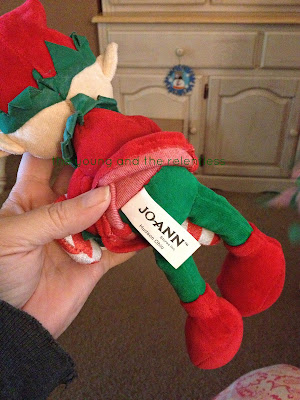 Damn Kindergarteners learning to READ!  I concocted an elaborate story about how some elves have their Mom's names sewn into their clothing because they can't carry drivers licenses and yes, Poe's Mom named JOANN is from Hudson Ohio. EDITED:  The kids now think that JOANN is Santa's girlfriend, which would make POE Santa's illegitimate son.

One dark and stormy night, they got into the tape and accidentally taped themselves to the entertainment center door.

Mallory soon decided that she was going to start writing to Poe because I told her that Santa emailed me and said that they had learned to read.  She has mastered the spelling of shenanigans. 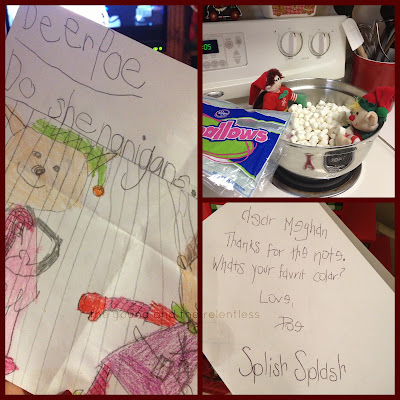 According to my friend Christina, one bag of mini marshmallows doesn't fit in the sink.  If you put them in a hot tub on the stove...you can re-use the marshmallows and they don't get toothpaste on them.

I had been complaining about our lack of mantel for the third year in a row.  And wouldn't you know it....those elves heard me and solved our problem!  EDITED: I knew I was forgetting something.  See the pencil that Poe is holding?  He was eating it...because that's what elves do.  They EAT pencils.  Keith was kind enough to gnaw on it.  Totally his idea! 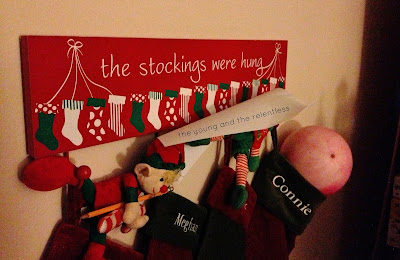 I could feel that the elves were going a little stir crazy....we've been having unseasonably warm temperatures and they love snow.  I just didn't know that they were going to go a little nuts! 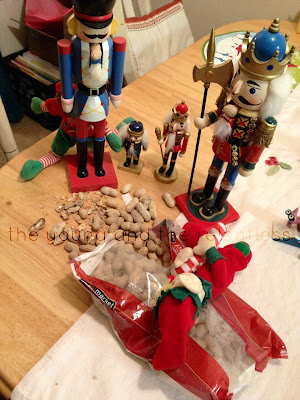 Scribbled by Connie at 7:08 AM

Email ThisBlogThis!Share to TwitterShare to FacebookShare to Pinterest
Labels: countdown to christmas, elfcapades 2012