This shall be an Easter I will not soon forget. Calvin picked his brother up from the airport Friday night so that he could visit us for a long weekend. I flew him out for his birthday (Happy Birthday Robert!) but also so that he could watch the kids for a few hours so that Calvin and I could go to Salt Lake City to have a little date time. When will I learn that I can't have a plan anymore.....

Alex....has been escaping from his cage for a week now. I put him down for a *rest* but not a nap because naps are for babies, and about 30 minutes later he stealthily sneaks down the stairs and scares the hell out of me. After this development, Calvin decided that we needed to purchase a Big Boy Bed and it had to be done while Rob was here so that he could help him. So much for my date.....

Calvin has no concept of time. It might be a side effect of being an engineer....I don't know but the man decided to start building this thing late Saturday afternoon when we had dinner reservations at 5:15pm at Maddox Steak Emporium and then decided to finish it up at 7:30pm when we got home. The poor kids didn't get to bed until after 10 pm and I still had to play Easter Bunny! And guess who won't sleep in his new bed?

Baskets and Eggs were assembled and hidden and I fell into bed....exhausted! 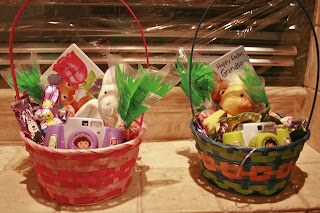 baskets, labor of love...contents from Aunt Bobbi, Us and Grandparents Olson 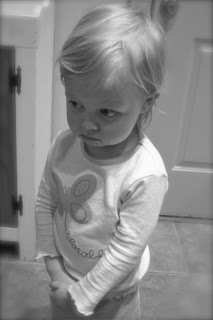 Children awaken early....and this one, doesn't want to hunt for eggs. Are you kidding me? Once we tell her that they are filled with candy she changes her tune but because she is the baby and lazy as can be....she makes her Daddy carry her basket and she points to the eggs for him to retrieve for her. 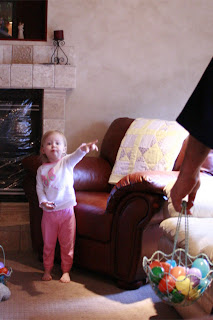 Ever seen a Daddy wrapped around a finger? 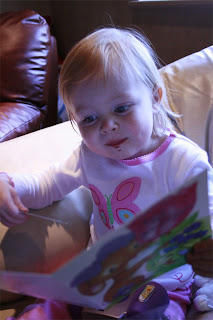 How lovely...a card and a meal from Grandma and Grandpa.... 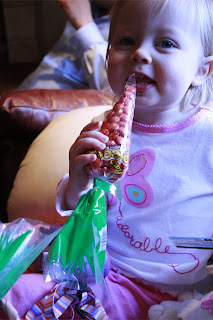 What's wrong with this carrot? 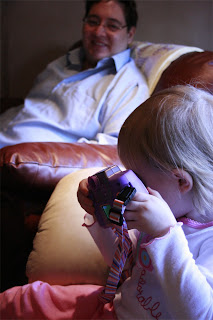 We bought them each a digital camera to put in their baskets. Mallory will not allow anyone to explain how the dang thing works so now we have 53 pictures of her eye ball. 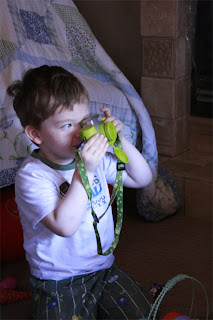 Alex is a natural! He loves his new toy! 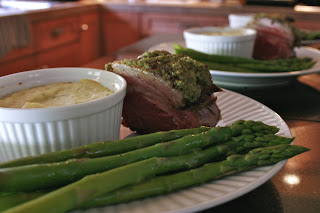 And then we ate Rack of Lamb, Twice Baked Potatoes and Lemon Asparagus Salad. I was filled with joy as I made this meal because I knew that Martha was making the same thing for her guests. It was delicious! I will be posting about this meal on my food blog later. Poor Calvin...I kept asking him if he wanted to see my Rack and then I would whip out my lamb! LOL!

While cleaning up from dinner....we suddenly realized that the children were silent. You know what this means. TROUBLE! A short while before we had told the kids...No More Candy. They decided to take matters into their own hands and stole one of the baskets off from the counter and were devouring as much candy as they could before being discovered! Unfortunately, many of the eggs contained Hershey Kisses and Mallory isn't skilled at tin foil removal and ended up eating much tin. I'm sure it will all come out fine....

My Sister's horse still hasn't had My Little Pony yet....run over and place your bet to win a Starbucks Gift Card!
Scribbled by Connie at 8:20 AM

Email ThisBlogThis!Share to TwitterShare to FacebookShare to Pinterest
Labels: Easter