The Elves Are Here! 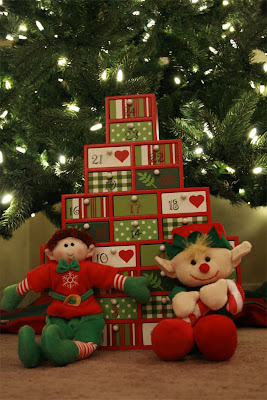 Vincent arrived this morning and he brought a helper named Poe. Apparently...my kids are a little too much for just one elf to handle. They brought the kids an Advent Box to count down the days to Christmas. Poe hid some M & M's in the box marked 24....and Alex grabbed most of them with one hand and stuffed them in his mouth, only leaving a few for poor Mallory. 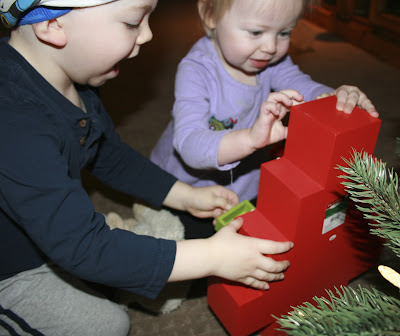 We tried to take the kids to a Christmas Parade on Saturday night and it didn't go very well. We arrived about 20 minutes early and I brought snacks but just minutes before it was going to begin...both kids melted down and screamed to go home! I guess we will try again next year...

Also, tried to take some pictures to include in our Christmas Cards. As you can see from the picture in my header....that also went poorly.

I don't even want to think about taking them to see Santa at this point. The hubby thinks that I am trying to do stuff with them too early, that they aren't ready. What do you think? What age should you start doing activities like this?
Scribbled by Connie at 9:14 PM