iKeith and I had a rare date night last night.  Aunt Bobbi dropped me off on a street corner downtown and then I met up with my date.  We had drinks and food and more drinks.  We were talking about this one time that I went to rehab in Texas and were trying to remember when that was.  I pulled up my blog to verify the date and found this gem of a blog post.  Please enjoy this blast from the past when my kids were so little.

Alex's booster seat has a hole in the top of it where a tray is suppose to fit in it, but we have him sit right at the table. He likes to stick things in the hole. Mainly....food he doesn't want to eat and his silverware.

He's a lot like his Daddy and likes his sleep so I wondered what had him up so early. He couldn't wait for me to get him dressed and was really losing patience with me wanting to hang up his clean clothes before I removed him from his crib. As soon as I had him dressed he was down the stairs like a shot, not even going to get Mallory from her room.

Mallory and I came downstairs to find Alex munching on a piece of pizza from last nights dinner!!! He was sitting on the couch watching The Today Show enjoying his crusty piece of pizza. I'm guessing he had hidden it last night and couldn't wait to get to it. 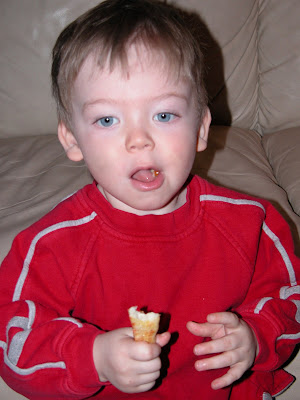 I asked Alex where he got the pizza and he went to the kitchen and showed me his booster seat. 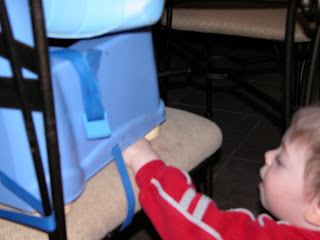 I just can't believe that he wanted MORE pizza because he ate almost half of a cheese pizza, part of an orange and a banana last night for dinner. 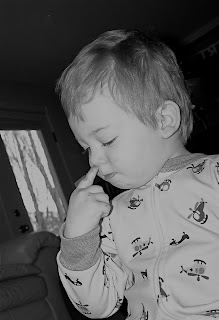 Hubby told a co-worker about Alex's antics and he suggested that child protective services should look into alleged neglect of a two year old that needs to hide food to stay alive. So I thought I would add a surveillance photo of the two year old victim stealing grapes from the kitchen. 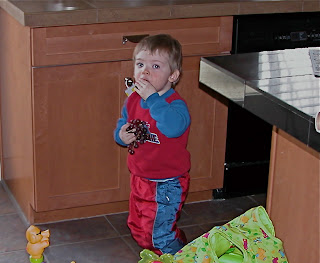 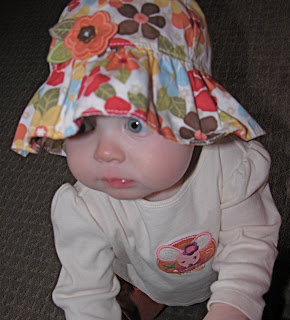 Isn't it amazing the lengths that this child goes to in order to sustain his life?
And he is probably sneakin food to his poor starving little sister.....
Scribbled by Connie at 10:55 PM