Every now and again....a catch up post is needed because stuff happened that didn't make it into a blog post.

This week....there has been a crew here rebuilding the basement and laundry room.  They found asbestes so there has also been a hazmat crew here. Good Times....

Have you ever noticed that when you don't like something...you see it everywhere?

If this concealer is made from dead squirrels....I'll buy it!

I've discovered that when I'm old....I'm going to be that lady that yells at kids that are on her lawn.  I'm already one step away from Gladys Kravtiz.  Some kid stuck a gogurt container in the grill of my SUV and they trapsed their muddy feet around in front of my apartment.  I wanted to buy this sign...but iKeith wouldn't let me. 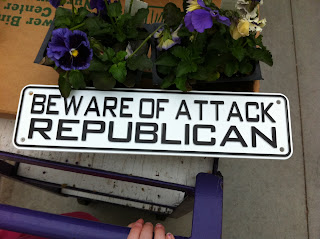 Last week....Alex had an evaluation for Kindergarten.  This charter school is serious business!  Wednesday we had an appointment with the Kindergarten Team to find out how he did. I discovered that being home schooled by Nick Jr isn't really working out for us.  If you want to know more about how this meeting went....email me at Connie@youngandrelentless.com for the full story. I should have known that his day was going to go wrong for me.  First I dropped a carton of eggs on the floor, then the cantaloupe was rotten.  Last straw....as we left the school. I broke my sunglasses. 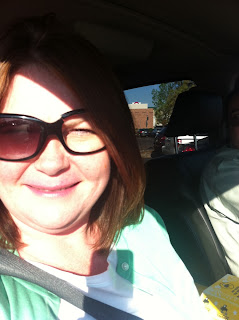 On the way home, I made iKeith stop at the liquor store by our house.  They know me there now.  I seem to always feel obligated to tell him why I'm buying a four bottle of wine.  I'm sure he loves my excuses.  I explained that my son was starting Kindergarten in the fall and I'm stressed out.  He advised me to switch to boxed wine in August....and he asked me if I knew my glasses where broken.

What I Did When I Should Have Been In Austin:

I was supposed to go to Austin last weekend.  I really wanted to go but finances didn't allow it.  I had a genius plan to sell my Canon Rebel to my bother in law Robert.  He's rolling in dough and always borrowing my camera when he travels.  He said he wanted to buy it....and then said he couldn't afford it. There went my plans.  I was really bummed! Lesson Learned: Even a gay man will not buy the cow when the milk is free.

I was in Austin in spirit and the ladies were nice enough to text and tweet me the entire weekend.  We sent funny pictures and videos back and forth and it was almost like I was there.  Here is a sample.

Friday night....one of the ladies (IA) tweeted me her phone number.  Sunday....I discovered that she had accidentally sent me the wrong number.  In the meantime, I sent ALL OF THOSE VIDEOS to some stranger.  When I started inquiring as to WHERE he was...he finally informed me that his name was TOM and that he didn't know me.

To see a video of really happened in Austin visit Becca's blog, and you could also win a prize.  You will even see a picture of ME in the video (i'm wearing a mask). And if you like her video and want her to make one for you...she does that too.
Scribbled by Connie at 9:29 AM

Email ThisBlogThis!Share to TwitterShare to FacebookShare to Pinterest
Labels: Random