Blast from the Past

I guess some of you are wondering what happened to me.

I've been working on my little project: Operation Move That House. Or something like that.  Yesterday I decided to tackle my craft supplies.  I discovered that I have more fabric and felt than any one person should have and that I thought at one time that I was going to open a stamping store.

I had lots of hard decisions to make regarding my crafting future and purged lots of stuff. I know I love to quilt and make pillows so I kept most of the sewing stuff. And the stamping supplies because you never know....

I also got my new iPhone 4 yesterday and I had to spend some time getting to know my new friend.  I love it...by the way.  And it will probably be my last new toy since soon...my standard of living will be lowered.

While decluttering yesterday, I came across a photo album from 1994-1995.  It only had a handful of pictures but the one's I saw made memories flood back. 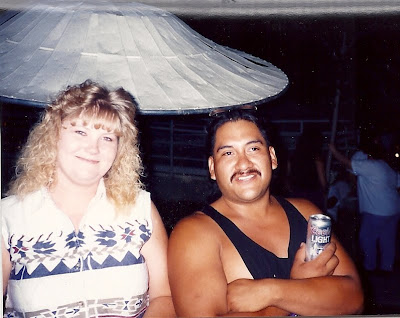 I thought I had destroyed gotten rid of all of the pictures of my ex-husband but this one was hiding out in the album.  This was taken right after I met him and it appears we were at a red neck UFO convention sponsored by Coors Light.

I don't talk about my marriage to Billy very much because it was a really dark,  hard time in my life.  There were times that I didn't think I could live through it and I wanted to end it all.  I thought I was stuck....until the stars aligned and everything fell in place for me to leave and start a new life.

Seeing these pictures prompted me to google his name and I was shocked at everything that came up!  Since I saw him at the Las Vegas Airport in the last year he has:


And 10 days ago...his baby mama was arrested for contempt.   I had that in spades for him...thank god no one ever caught me!!

I'm counting my lucky stars that I got away from him when I did.  And I'm so sad for little Charlie...2 1/2  months old and his Mom was in jail.

Today...I'm hitting the town with Shannon, Sara to have some drinks (milk for Shannon...she's 8 months pregnant) and see a movie.  I'm completely disgusted that Sex and The City 2 is not long playing in many theaters!  Whatever...
Scribbled by Connie at 4:10 PM