I scheduled our Florida bound flight for late afternoon because it was cheaper and I thought the kids would be exhausted from traveling and the time change and fall into bed when we arrived.  I didn't anticipate that they would be so excited to leave on vacation that they would bug me all freakin day asking if it was time to leave.

We're finally on the plane and they shut the doors.  We're taxiing to the runway when I guy a few rows ahead of me hits the alert a stewardess button.  She addresses him over the intercom and tells him to shut it off if it's not a real emergency.

He doesn't shut it off.

Two stewardesses come to the row and he explains that the guy next to him has just passed out and he thinks there is something wrong with him.  They ask if anyone is a doctor.  There are NO doctors going to Orlando at 4:30pm on a Sunday.

They wake the guy up and he says he's fine.  They ask him a bunch of questions and he keeps passing out.

Next thing I know, we're turning around and going back to the gate.

My kids lose their shit!  They want to go to their favorite place in the whole world.  Orlando! I love you Orlando!  Sea World and Disney and putt putt golfing!

The doors burst open and several Denver Firemen board the plane and start checking the guy out.  He finally comes around enough to tell them that he sat in a bar and didn't eat. 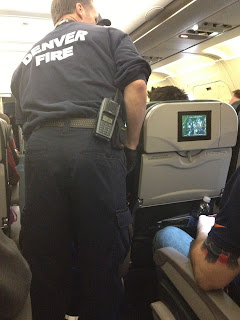 They removed him from the plane and we were finally able to take off and head for Orlando!

I bonded with my seat mate during this ordeal and I'm kicking myself for not getting her information.  She was awesome!

Side note: Stewardesses frown upon you taking pictures of drunk guys on airplanes.  I really was just taking a picture of the hot fireman.  Whatev.

The Taxi Ride from Hell

Wednesday was a rough day for us. We woke to learn that Obama had been re-elected.  Talk about putting a damper on your vacation!  During the day, Keith decided that he couldn't stay in our cheap little hotel room another night and that his wife desperately needed a hot shower.  (even Gru noticed, but more about that later) We'd planned to move to Disney's Caribbean Beach Resort on Thursday morning but Keith couldn't wait so we called and booked an extra day.

We called for a cab and 20 minutes later, a van arrived and loaded our stuff.  The guy spoke very little english and had a GPS that he used to enter the address of our destination.  It didn't come up on the GPS thingy.  He called someone and they gave him vague directions.  Keith looked up the hotel on his iPhone and tried to direct him but he didn't understand.  We drove around and around passing the road that we needed to turn on and finally....the guy understood enough to get us to the hotel.

Side note:  I should know by now that my husband is a snob and can't stay in budget hotel rooms that may or may not have hot water issues.

Another late afternoon departure but this time the kids were fine with it because we spent the morning at the pool!

The cool thing about flying west in the late afternoon is that the sun sets for a couple hours as you pass through time zones.  It was spectacular! 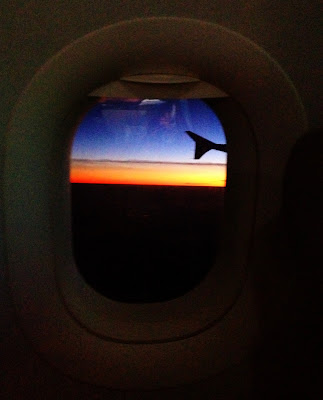 We knew it was cold in Colorado but we didn't realize that a freak snow storm had hit an hour before we landed.  As we were taxiing to the terminal, we saw at least 30 emergency vehicles on the runway and learned that a plane had slid off the tarmac as it was landing!  My phone was blowing up with concerned family and friends that knew we were flying in that night.  Luckily....it wasn't our flight and I was able to update facebook with the news that we were safe! Gosh I love facebook.....

The problem with living in Colorado and traveling to a sunny location in late fall is that the temperatures could very well be warm when you leave (so you don't bring winter coats) and then when you return 6 days later, it can be snowing and your vehicle can be frozen to the ground.

The Wizarding World of Harry Potter

Scribbled by Connie at 6:54 AM