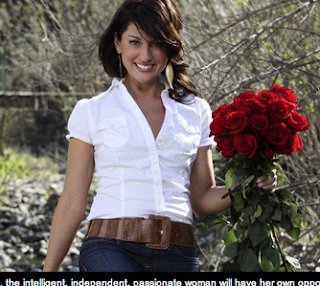 I missed the first 10 minutes of The Bachelorette this week because my DVR keeps recording old episodes of Big Bang Theory. So I joined the show while Michael ad Jillian were zip-lining across the tundra of Whistler. It looks like they are having a great time and Michael doesn't look scared like Ed did on his zip line. In fact this is a real zip line that goes fast and stuff. I don't see any chemistry with them...but Jill says she feels 19 again and that Michael is like a big goofy puppy. She ends up giving him a rose and a HUG. He kisses her and she HUGS him.

The group date is a snowmobiling trip into the wild Canadian woods. She invites Robby to ride on the back of her snowmobile so she can pop his snowmobile cherry and makes the other guys ride two to a machine. Why couldn't ABC afford to rent each of them one?

She talks privately with most of the guys feeling them out to see if they have girlfriends. She decides that she can trust Robby and that he is raw & sweet (like sugar?) and she says that she would definitely know if Wes had a girl back home. He also claims that his sister signed him up. Does Wes really have a sister? They all spend a ridiculous amount of time outside and it gets dark and they are standing around this bar made of snow and Jilli decides to awkwardly dance on it.

She is HUGGING everyone. Little to no kissing is going on...looks like David hit a nerve last week.

She and Kiptyn make out, she has a chat with Reid and he tells her that everyone has girlfriends and in fact, he has two wives. Ed...has been holding back and not looking her in the eye. She pulls him aside and he tells her that his boss is pressuring him to come back to work. She HUGS him and then gives him the rose.

Jesse's date card says they are going to break the ice. Oh great more frolicking in the snow. Jilli squeals when she sees him and they fly in a ski plane to a glacier and run around in the snow, make snow angels and stamp out J + J = Forever in the snow and Jill squeals like a pig. I would like to know what the heck you're supposed to do when you need to pee. They decide this is the best day ever and they will remember this day for the rest of their lives.

At dinner later Jilli asks him where he sees himself at 35 years old? He says successful, owning a wine bar, a house, a wife and kids. She is so happy I think I saw her pinch herself. Jesse tells her that her voice is soothing to him...I thought this was really sweet. Oh course, he gets a rose and a HUG. She says there are major sparks but she has to find out if he is husband material. How is she planning to do this? Maybe they could shadow Kate and Jon for a day.

Ed requests a meeting with Jill. He is really sorry but he has to go home to his job. She is really upset and crying and saying his priorities aren't the same as her's and that she wishes he had thought about this before joining the show. I think she was a little hard on the guy. I happen to think it says a lot about his character that he is not willing to be unemployed. He is one of 10 guys...those aren't great odds for him to sacrifice his job to maybe get picked by her and then what? Is she planning to support him? I've always wondered how people are able to put their jobs on hold for weeks at a time to appear on this show....

Fast forward to the rose ceremony. She tells Chris Harrison (like he didn't know) that Ed had to leave that she is really upset about it because she was starting to fall for him but she isn't sure he was THE ONE. She decides she doesn't need a getting to know you better cocktail party and wants to just get to the ceremony and send someone home.

She sends Mark the Pizza Guy packing and in his parting words he tells us that he has been cheated on 4 times. WOW. Either he is dating some really skanky women or he is a doormat.

For next week: The Bachelorette drinking game!

Take a swig of your drink every time Jillian....

David~27 Trucking Contractor from Ohio
*First Impression Rose, picked by Globetrotters as match for Jill, keeper of the Man Code, wants to tie Juan to a tree and beat him, acts like a Toddler, a challenge

Jake~ 31 Airline Pilot from Dallas
*gave her wings, first One on One Date, ab's of steel, perfect

Jesse~27 Wine Maker from California
*turned down Italy for Jill, MVP of Curling, wants to be a Canadian, makes Jillian giddy

Michael~25 Break Dance Instructor from New York
*in gay scene with Mike, has a crush on Jill, big goofy puppy

Robby~25 Bartender from Houston
*made her a ROZMO, great movie scene with Jill, agrees with David

Ed~29 IT Consultant from Chicago
*looks like Denny, popped his helicopter cherry, workaholic, had to leave for work

Reid~ 30 Realtor from Philly
*been in love 1.5 times, cuddly

Juan~35 General Contractor from California
*brought her wine, most hated man in house, dumps out his shots, gentleman, cheese-ass
Scribbled by Connie at 12:10 PM

Email ThisBlogThis!Share to TwitterShare to FacebookShare to Pinterest
Labels: The Bachelorette: Jillian