The Last Days of Raggedy Ann

Once upon a time in land not so far away in the village of Edelweiss...there lived a prince and princess that loved all of their toys.
It came to pass that their selfish uncle who was third in line to the throne would give them a gift and this gift was cherished by the queen (the mommy) because the selfish uncle never gave gifts.
That is how Raggedy Ann and Andy came to live in Edelweiss.
Raggedy Ann and Andy lived a boring existence at the bottom of the stuffed animal pile until one day when the prince and princess became curious and removed their clothing. 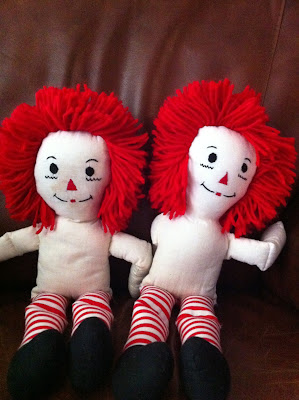 The queen could not tell the non-anatomically correct dolls apart so she took it upon herself to correct the situation and give Ann a boob job.
Ann spent several days as a buxom red head, enjoying a renewed love affair with Andy and the attention of the prince who recently decided he's a boob man.
And then the unthinkable happened!  The queen's father arrived for a visit with his vicious Jack Russell Terrier.  The queen has a policy that whenever someone comes to visit they are forced to babysit so she'd left the dog and Grandpa with the prince and princess.
She returned from the store to find that Raggedy Ann had been murdered and her stuffing, head and arms where strewn about the castle.
Raggedy Andy is distraught and plotting his revenge agains the villainous Jack Russell named Scooter and the queen banished him from the kingdom because he also pooped in her chambers.
Scribbled by Connie at 8:35 PM