How I Spent My 40th Birthday

We started the day at the Rocky Mountain PBS Kid's Fun Fest.  It's the biggest free family party in Colorado!  There is a bouncy house, a climbing wall, a stage coach, an Urban Farm (aka...petting zoo) and guest appearances from Curious George, The Cat in the Hat and Clifford the Big Red Dog.  I won't tell you how many children I had to knock down to get my picture with Clifford. 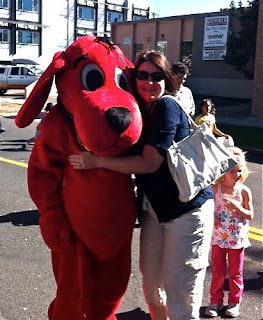 There was an incident at the bounce house that has our house divided at the moment.  After I tell you about it...please take the poll on the right hand sidebar.  We were waiting in line for the bounce house for around 30 minutes.  It was one of the most popular attractions there and the kids were being very well behaved even though we had to stand in the sun.  Mallory was so excited because it was her first time to enjoy the pleasure of the bounce house. Finally...we were next and we were about to step up onto the mat to remove the kids shoes when a woman came running up with 3 kids and cut in line.  Her husband had been standing in line in front of us for his family.

I told my children (rather loudly) that I was sorry but they were not NEXT.  The Dad said he was sorry but that his kids won't stand in line that long.  I told him that my kids had to...why shouldn't his.  And then iKeith told the Dad that we understand...blah blah blah.  I thought it was incredibly rude and inconsiderate to all of us that waited in line and that it teaches HIS children that they don't have to wait, or do any work to get what they want.  What do you think? And then I flashed about 30 people who were waiting in line to sit in the Stage Coach. When Alex sat on my lap...about 4 of my buttons slipped out of their holes and when I got out of the stage coach my shirt was unbuttoned to my waist!! Oops.


As we were walking back to the car we saw this on the sidewalk and I got really excited about how iKeith and I were going to celebrate my birthday later that night.

Uncle Andrew babysat the kids for us and we started the evening at Sketch Wine Bar.  click here to see pictures and details about what we ate. It's a really fun wine bar in a historic neighborhood in Denver.  We had a great time drinking wine and magic sangria, eating meat and cheese and talking to people that came and sat at the bar.

Soon it was time to head over to the Curious Theater to see Dead Man's Cell Phone. It's a community theater but with amazing professional actors, that has made it's home inside an old church that was built in 1880.  It is a cozy and intimate setting with an orchestra and balcony area.   Curious is in their 13 year and they have been awarded a Best Theater Award by 5280 Magazine. 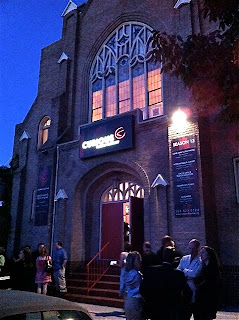 We were 6th row center which was perfect!  I was so happy and excited because this was only my second play.  I've seen many, many musicals but only one play....this was one reason that I really wanted to see a stage performance for my birthday.  Because you know I'm all about trying new things. 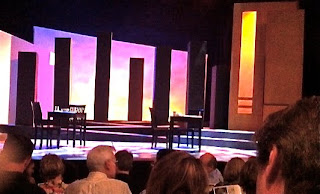 I loved the play!  Seeing a story unfold with real people right before your eyes is an exciting experience.  This is an odd ball comedy about a mousey woman that discovers the man at the table next to her has died and his cell phone is ringing...and ringing.  This woman takes it upon herself to keep answering his cell phone as she informs people that call of this man's passing and she begins to tell stories to help comfort the people he's left behind.  She also becomes accepted into the dead man's family and helps them deal with their loss....even though she's mostly lying to them.

It was opening night so as part of our theater experience we were invited to an after party with the cast.  I was scared to go inside but iKeith convinced me that I'd be sorry if I let my fear of walking to a room full of strangers stop me.

I'm so glad I went!  I was able to meet and talk to all of the cast, the director and the owner of the theater.  I even walked right up to a gal and talked to her because she was wearing knee high socks and ended up having a wonderful conversation with her.

It was the perfect birthday!  I'm so glad that I had this experience on my 40th birthday....it's a night I'll not soon forget and I'm excited that we found this theater because we can't wait to go back and see more plays there.
Scribbled by Connie at 11:03 AM

Email ThisBlogThis!Share to TwitterShare to FacebookShare to Pinterest
Labels: 5280, Theater