Last week, I saw a tweet from Curious Theatre that said they were selling tickets to a sneak peek of their latest play Astronomical Sunset for $10.  I got so excited because we can't afford to go to The Theatre very often because tickets are usually $40-$100.

I immediately started texting my Brother In Law to see if he could watch the kids for me so that iKeith and I could attend.  I haven't utilized Family Babysitting as much as I could have because they make me feel like I'm asking to borrow $7500.  Finally...after much back and forth....he agreed!

I bought the tickets and then sent an iChat message to iKeith and told him about our iDate.  And I sent him a link to the description of the play and he wrote me back and said:

iKeith: Did you know about this.

iKeith: Where are our seats?

In fact, I DID NOT know because I didn't read the fine print and frankly, I'm surprised that he did.

We had a great night!  We started with Family Dinner at my in laws were a fight broke out about politics and I wrote my mother in law out of my will.  The conversation then went on to Halloween candy and Robert informed us that each little candy bar contains 50 or more calories.  We all talked about how hard it is to resist the candy before the big day and then my mother in law told a bald face lie and said she eats ONE LITTLE CANDY BAR a week.  I call bullshit.

Finally it was time for us to go and we stopped at 240 Union for a glass of wine and I got to see the bar stool where iKeith was sitting the night that the mystery woman picked him up and brought him to Little Bear.

We arrived at Curious Theatre Company and the set looked great!  It was a living room...in a cabin in the woods. Sitting so close to the stage it felt like we were sitting IN the living room! 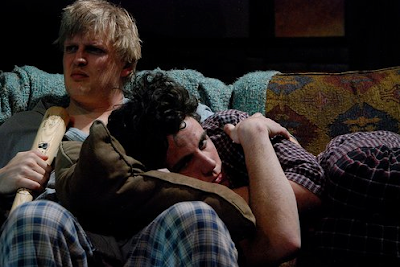 The play was great to watch near Halloween!  Creepy, suspenseful and kind of confusing. I'm not a seasoned play goer yet so it takes me a while to understand some things that happen during the show.  I usually figure them out as iKeith and I discuss it.  He's also really good at analyzing plots.

The bonus of this sneak peek was that we got to stay after and chat with the assistant director and one of the script writers.  They asked us what we liked about the play and what we didn't like or understand.  They also explained some things to us that I didn't get right away.  It was a wonderful experience!

One thing they asked us was about the male nudity.  Actually....I was quite surprised to realize that I was uncomfortable with it and it probably didn't need to be in the play. I also told them that I see that every day in my OWN living room.  iKeith was thrilled!

If you live in Colorado and you want to see a really great play at an adorable little theatre....Astronomical Sunset by Robert Lewis Vaughan is playing November 6-December 4.  And if you go and Jim doesn't strip down to his birthday suit...I'm sorry, that's probably my fault.


*I have my iChat name set to Connie the Great so that when I log in and out when iKeith is at work he hears...Connie the Great is now available.
Scribbled by Connie at 7:38 AM

Email ThisBlogThis!Share to TwitterShare to FacebookShare to Pinterest
Labels: Theater