Last week, I took the kids to get their yearly check up. I decided to start taking them to see Cindi (my weight loss doctor...but she's also family practice) because I like her, I trust her and she has 4 kids so I think she has great experience as a health care provider. Plus, if the health care bill jacks everything up...I want to have a doctor friend in the family. Also, my sister Bobbi works for her. The kids LOVE their Aunt Bobbi so who better to make them cry when they get shots.

At the appointment....Cindi asked Alex to draw a stick figure. In my head I'm screaming at myself, 'You idiot! You haven't taught Alex how to draw stick figures! We've been working on circles and squares! Which are obviously so last year!' Alex...saves me and draws a circle and a line which Cindi accepts as a stick figure.  Either...she's not had many stick figures drawn for her, or her kids are not artistically inclined.

We move on to jumping on one foot which I've not taught him either but Mallory jumps in and does it so it looks like I've been doing something with my kids. This would also be a good time to note that she also read the eye chart for him.  On the way home, I bought Mallory a pony.

I relayed this information to Calvin at dinner that night and he took it upon himself to teach Alex how to draw stick figures....on the iPad.  We are NOT old school around here...we are high tech.  Alex did great and this is what he drew by himself. 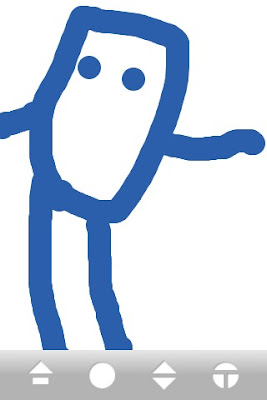 It's a bobot!
Do you have some art work that your kid has done with a great story behind it? Link up at Buried with Children.
Scribbled by Connie at 4:57 AM