The Bachelorette...It Ain't Me Dude 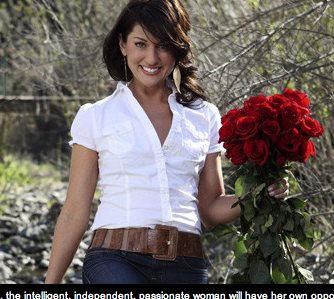 Oh Jillian. I was completely prepared to throw things at you this week because you appeared to be the dumbest woman in Canada. But then you gave me hope that you do have a good head on your shoulders.

The group went to Spain for their hanky panky dates. Or as Mama Kat called them...four one night stands.

Kiptyn was first. She has adored him from the start and thinks he is the perfect package with all of the qualities that someone would want to marry. She mentioned his hometown date and how cool his family was. And then she said that his mom was a doll and full of energy. That was code for...your mom is a little overbearing and I'm scared that she might be my Mother-in-law soon. They had some serious conversations and he told her that a proposal seems far off. She was obviously taken back and told him that she wants an engagement at the end of this and that you must take a leap of faith. At the end of the date, she turned down the one night stand saying that she didn't want to get her feelings confused by knocking boots with him. They did cuddle somewhere for a little bit but then she sent him on his way.

Reid was next. She described their relationship as slow to start but that they have physical chemistry and that she's crazy about him. She does question if he is ready. Their date was really funny and romanic (this is how REID says romantic and would be a deal breaker for me), they had a picnic basket and they needed to fill it with food but they don't speak any spanish and found it difficult to order anything. During the date, Reid continually says that he really, really likes her and tells the camera that it could be love but he isn't sure. Jill is giddy around him. Also, no one night stand for him either.

Oh Ed. (sigh) He earns himself a run, hug and squeal! Jillian is worried that Ed is too career driven and is still upset that he left her. They talk about it but I really didn't get an explanation from him...just that he couldn't stop thinking about her. They discussed how she didn't get to meet his family and she asks about them and he doesn't really say much. He also has horrible eye contact skills and it's freakin me out. Ultimately, she invites Ed to the fantasy suite so that she can catch him up to the other guys and by catch him up she means make out for hours.

Last and certainly least is Wes. Before he even meets up with Jill he makes a remark about the music scene in Spain. DUDE. You are here to see Jillian. They meet up and take a bike ride to a picnic where he sits as far away from her as he can, doesn't looks her in the eye and hasn't touch or kissed her at all. She is noticing the lack of affection and when she asks him if he would move to Vancouver for her he just *blinks* and doesn't really give an answer. They he used a great conversation ender....he spilled his beer all over his @ss. At dinner, he was distant and when she again grilled him about Laurel...he slipped up and said that he told some of the guys about his *girlfriend* and that he was with her for 6 years (was she with Wes when she was texting BRAD WOMACK?) Then he admitted that he was there because his manager thought it would be great for his music. And he told her Numero Uno is most important!

At this point, I am yelling at the TV...WALK OUT JILL! KICK HIM TO THE CURB! NO FANTASY FOR YOU PAL! He says he thinks they should use the fantasy suite. I almost lost my mind!

Jillian comes to her senses and escorts him outside to a cab. She says that she is embarrassed that he rode her this far....

And then we had The Most Clearcut Rose Ceremony EVER! And I was sad to see that Chris Harrison didn't make it to Spain. As the guys are standing there...Wes remarks to the guys that he will soon be back home having lots of sex. The looks on the guys faces....priceless!

Jillian comes out and thanks the guys for making her feel beautiful and in love. (expect for you Mr Jack@ss..you know who you are) She selects Ed, Reid and Kiptyn to be her lovers in Hawaii and walks Wes out to a waiting limo.

This is where it got really interesting. Wes says...he is the FIRST GUY on the Bachelorette to make it to the top 4 with a girlfriend! With an ugly smirk on his face he said it's going to take him a loong time to get over this and then says he is going to get his freak on in Spain! EVERYBODY'S GONNA KNOW MY NAME! He says that his acting days are over and that this was just a bump in the road....and he's cutting off the chains. THEN...he said that ED wouldn't even get so much as a nibble back in texas.

First of all, I would nibble ED from head to toe. He is a real man and you...my friend, are a loser! I don't think I have ever hated someone on a reality show before. You are a sorry excuse for a man and I hope to god that no one buys your music. Just because everybody knows your name...doesn't mean that you will benefit from it. If I walked into a bar in Texas and saw your name on the marquee...I would walk out. The only job I really think you're cut out for is delivering singing tele-grams. Or maybe a singing Wal-Mart greeter. Here's the thing...you are just a run of the mill bar band. I've seen my fair share and you aren't anything special. In fact, you are an embarrassment to country music. OH and here's a great title for your next single....It Ain't Me Dude.

Good Luck...you're going to need it.

Please take the poll on the left...thanks! 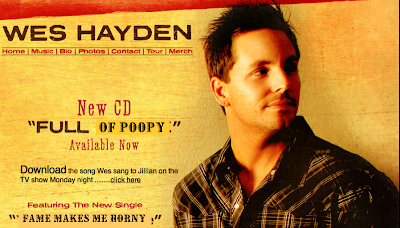 Scribbled by Connie at 6:18 AM

Email ThisBlogThis!Share to TwitterShare to FacebookShare to Pinterest
Labels: The Bachelorette: Jillian