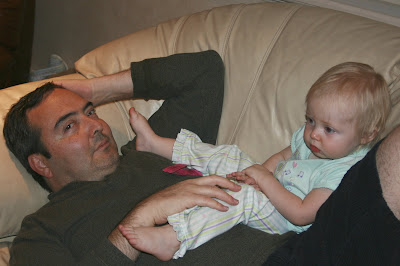 Her Daddy has season tickets to the Denver Broncos and he took her to Denver with him. She had a lovely time.....visiting with Nana, Poopa, Drew and Rob. She ate grapes and blueberries and spanish rice. She watched Bunnytown and colored.

And she missed her Mama.

Mama (that would be me) had serious separation anxiety. I had the hardest time letting her go and being without her. I don't know if it is because she is my baby....or because she is a joy to be around.

Erick, on the other hand was pleased that she was gone. He played so hard and with so much concentration that he did not want to take breaks for meals or to go to Target to buy a new train. He reminded me so much of his father...... 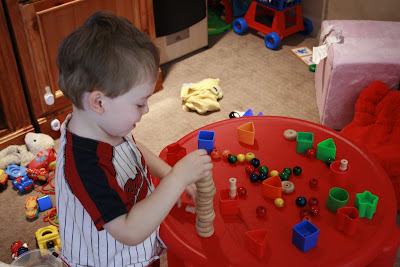 Can you find Sam the lamb in this picture?

But venture to Target we did. We bought a Thomas the Train treat bucket for Halloween and an orange VW bug matchbox car (he couldn't decide on a train). I made a big deal about buying Thomas the Train underwear for him since he pooped and peed on the potty on my Birthday but alas....he is again, not interested in Potty Learning.

Sunday, was Calvin's 45th Birthday. We got him a new Bronco jacket and the 2008 players hat. His family got him a Bronco watch so he looked like a big ol dorky fan at the game. He went to the game and had a great time with his childhood friend Alan. The Broncos won in the last two minutes! He says it was one of the best birthday's he's had in a long time.

Mallory and Calvin flew home that night and I couldn't sleep until my girl was home. Calvin brought her in from the car and I hugged her, kissed her and put her to bed.

You're the end of the rainbow,
My pot of gold,
You're daddy's little girl
To have and hold.
A precious gem
Is what you are,
You're mommy's bright
And shining star.

You're the spirit of Christmas,
My star on the tree,
You're the Easter bunny
To mommy and me.
You're sugar you're spice,
You're everything nice,
And you're daddy's little girl.
Scribbled by Connie at 6:56 AM