I'm starting to notice a reoccurring theme in my life.

My education in Greeley Colorado was....lacking.  I'm sad to say I did not learn about Dr. Martin Luther King Jr. in school and I'd really like to know why since I had his birthday off starting in 1986. My Vietnam Veteran Father took great offense to this because I was required to attend school on Veteran's Day.  Granted, my Dad was nearly killed in D.C. while serving in the Army because he was assigned to the riots that erupted in the late 60's.   My knowledge of King was tainted by my Dad's experience.

I would liked to have learned in school, what I learned during the movie Selma and what my kids learned this week in 2nd grade. 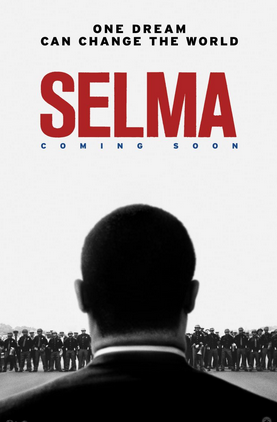 Selma was eye opening for me, as you can imagine.  I did not know Dr. King won a Nobel Peace Prize and that he wished for non-violent protests.  I did not know politicians and law enforcement in the south were not following the law and were instead taking people's rights away.  It is heartbreaking to see.

I highly recommend Selma to anyone who doesn't think they know what was happening in American in the 60's.  I'd also advise you to bring tissues and a best friend.  This film should not be viewed alone.

I'd also advise you to take some of what you see with a grain of salt because as is often the case with films made about actual events, I believe some of the facts are embellished for entertainment value.  Did LBJ really say, 'Don't shit me George Wallace?'

I'd like to know more about what happened between LBJ and MLK and if the President really did drag his feet on the Voting Rights Act. It seems like so much turmoil and deaths could have been avoided.  My husband (who received better schooling than me) tells me LBJ didn't have the authority to do anything and it was in the states hands.  In that case, all I can say is, 'Are you shitting me George Wallace?'

Selma is nominated for Best Picture and for Original Song.

The Song, Glory by John Stephens and Lonnie Lynn and sung by John Legend and Common won a Golden Globe for Best Song.
Scribbled by Connie at 7:20 AM